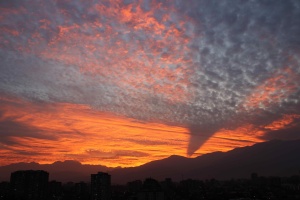 This is the conclusion to a short story I wrote entitled “Holiday Bob.”

Hiltz filled the control room with white noise. Terra had only heard him do that once before. The soundstage was emptied and tidied; “Happy Holidays from the New West” had wrapped over an hour ago. As far as Terra knew, it was only herself, Hiltz and the Guardians in the room. White noise scrambled the Guardians’ Ears.

Terra knew, just like the last time, that there wasn’t much time. They both faced their monitors and pretended to manipulate the controls.

“So what happened?” Hiltz asked, no inflection in his tone. They would have to keep their voices flat, it was the only way to trick the sensors.

“That explains the promotion,” he said. “Maybe the shoes, too.”

“Fuck,” she said. “What do I do with this? You know as well as I do, if I haven’t paired or progressed within the next three years, well. . .”

“Well, you know as well as I do,” she continued.

“There are other ways,” Hiltz said.

“That’s pretty much what Holiday Bob offered,” she replied.

Terra strained to keep her eyes on her monitor. She had never heard Hiltz curse before.

“You can make a way for yourself without hitching on to him. Literally and figuratively,” he said.

Terra sighed. She wanted to ask “How?” but knew she didn’t have time for the answer.

“Maybe Mrs. Mask at my complex can hide me away if I haven’t figured things out in three years,” she said.

“It won’t come to that,” Hiltz said. He turned and looked at her. His face was dark, but his eyes shone with something that almost set the control room ablaze. Terra understood. Not with her head, but with her heart. The white noise faded.

Terra’s body rode the air car back to her shelter complex, but her mind was elsewhere. Mostly back in the control room, and the print room. And she thought of something she hadn’t thought of in a very long time. Devotees.

Terra wasn’t even sure what Devotees were. They were legends, and myth, and the apocryphal whispers you hear in Primary Development. All she knew was they had something to do with something very ancient, and that the New Regime had a zero tolerance policy. If discovered, Devotees received complete erasure. At least, that’s how the rumors went.

You couldn’t even say the word. She was afraid to even think of it.

Instead, she thought of the three paths laid out before her.

Holiday Bob. She knew, from the crew list, that his name was Andy Gredenko. She thought Holiday Bob suited him better. And there already was a Mrs. Gredenko. Leaving Terra with the option of wild, illicit, sexual escapades with Holiday Bob on the side. It was tempting.

And gaining the favor of a progressed and paired citizen would buy her some time. But would it be time worth having, in the end?

She’d heard the stories of the camps for spent sex servicers. “Holiday Villages,” they were called, ironically enough. She looked through the window of the air car, out past the eastern settlements. She’d always heard the Holiday Villages were out there, somewhere. She envisioned wrinkled and wizened men and women, still wearing clothes that once hugged and flattered, now sagging like their skin. She imagined them rutting on each other, unable to purge the instinct that led to their survival. Pathetic and sad.

Second option. Do nothing. Resist Holiday Bob, focus on her work, hope for a promotion. If she didn’t have it in three years, she’d be “transferred.” Terra had seen three people from West Central get transferred. Wendy Taormina, Regina Weatherly, and Old Man Hank. He’d always been called Old Man Hank as far as she knew, even though he was just thirty years old when they threw his transfer party. That was the golden age for transfers.

At your transfer party, everyone would gather in the print room, and eat a replicated cake (that always left you thirsty). The Big Man would show up via hologram. Everyone would say their congratulations, and then you wouldn’t be seen anymore. By anyone. Ever.

Transfer parties were neither pathetic nor sad. They were terrifying.

And then there was Hiltz. Sweet, serious, funny, Hiltz. She would have called him her best friend, if they were allowed such things.

He was already progressing, apparently, with his Level 3 clearance. She was relieved she wouldn’t have to attend a transfer party for Hiltz. He was a year closer to it than she was, anyway.

The thought of Devotee bubbled up again. That’s what passed unspoken between them, less than thirty minutes ago. Hiltz would make sure Terra never had a transfer party. That’s what he meant, she was sure of it.

Terra was still confused by this change of heart from Hiltz.

The air car rode into the sun. The sky was a brilliant mix of orange and indigo. It could almost be called pretty, if it didn’t look like that every night. The sameness of any beauty makes it boring.

She had never found Hiltz boring, and didn’t think he found her boring, either. But she knew he didn’t feel that way about her. She knew it, from the one other time he turned on the white noise. It was two years ago, after Terra had been at West Central about four months. Her crush on Hiltz must have been pretty obvious, because he turned up the white noise, instructed her to keep looking at her monitor, and told her he didn’t feel that way about women. He was sweet and endearing even when he told her that.

Why would he sacrifice like that for her? It was unlike anything she had ever contemplated. If he wasn’t interested in her sexually, why would he want to bond with her? She thought of Holiday Bob again, and her stomach cramped. He was paired, but seeking external amusements.

Maybe that’s what Hiltz would do. But she couldn’t see it.

She thought of the Daddy Mammoth in the tar pits. Maybe he had sacrificed for the Mama and their child. Maybe he was going after food, or something. Hiltz seemed more Mammoth, less Holiday Bob.

Terra looked behind her in the air car. Only two people, four rows back. The rows ahead were empty. It still didn’t feel safe, but she thought of them anyway. Devotees.

She would think of them when she’d see Mrs. Mask on her knees, cleaning her window with her scarf covering her head. Every time she cleaned the window, she had the scarf on. Terra had seen it often enough, she thought it must be the cleanest window in the entire complex. But forbidden thoughts of Devotees were easy to dismiss with Mrs. Mask. Terra chalked it up to compulsive behavior or boredom. Or loneliness, since Terra had never seen a Mr. Mask. Or another Mrs. Mask.

Thoughts of Devotees weren’t so easy to dismiss with Hiltz. He had this weird gesture sometimes, usually after the Big Man’s hologram dissipated. Hiltz would look like he was swatting gnats in front of his face. The first time Terra saw it, she laughed. But after seeing it multiple times, she figured it must be some sort of tic.

Mrs. Mask on her knees with her obsessive cleaning, and Hiltz with his weird tic. She was surprised the Wellness Ministry hadn’t prescribed anti-psychotics for them both.

The air car lurched forward, then stopped. Sepulveda, already. Terra put her thoughts away, tucked her head down, and scurried to the exit. She was ready to be home.

Her houndstooth dress itched her in places she couldn’t scratch, and her feet ached. Any other time, the day’s events and her racing mind might interfere with her sleep. But her body felt so worn out, she didn’t think there would be any trouble tonight.

She had three years, still. There was time to figure things out with Hiltz. It was nice to know she had something to fall back on. She might still try Holiday Bob, too. Maybe he could open the door to something, or someone, better. She had heard rumors of that happening.

The walk from the air car terminal felt longer than usual. The light had all but faded, and the overheads were not working. Terra couldn’t recall a time when they ever had. She passed through the holo-gate to her complex.

Not much longer, now. The shelter office, Mrs. Mask’s window, then the door to her room. She would gesture to Mrs. Mask as she always did. An acknowledgment of their unspoken alliance. Once inside the threshold to her room, she would undress and crawl into her cot.

Walking the cracked cement path, she turned her head slightly toward Mrs. Mask’s window. It was empty. No small square table set with powder bowls, no lamp with the red shade. Just empty space and a cinderblock wall.

Terra wanted to stop. She wanted to peer through the window to make sure it wasn’t a trick of the light. She wanted to see Mrs. Mask pop out and surprise her. Maybe she had moved the table, and the lamp, for a deep cleaning.

She quickened her step to her doorway. Once inside, she disrobed just as planned, but couldn’t stop the tears that escaped her eyes.

She collapsed face forward onto her cot, and hoped the tears went unnoticed.