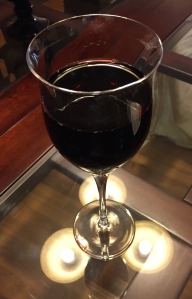 This is part two of three of a short story I wrote entitled “Holiday Bob.”

“You chose wisely,” Hiltz told Terra, eyeing her up and down.

Terra smoothed the seams of her red and black houndstooth dress. “I thought the ‘sexy patriot’ look might be fitting,” she said.

Terra felt a sudden sense of longing for the old red, white and blue flag. It was as comforting as Old Spice. The New Regime’s red and black was stately, but with an undeniable undercurrent of sinister.

Whatever. The new colors suited her pale skin and ebony hair better, and this particular dress hugged her curves in the perfect way.

Terra tried to focus on doing a good job. It was the only thing within her control. There was a one in three chance that Holiday Bob would not be in the production crew today. If he didn’t make it, maybe his replacement would be someone better.

It’s silly thinking like that, that keeps you from progressing, she thought.

Terra stepped away to the lavatory. When she returned, she saw Hiltz grinning ear-to-ear.

He gestured in the direction of the soundstage.

There he was, behind the control room glass. He was wearing proper shoes.

Terra raised an eyebrow at Hiltz. Slow and deliberate, she returned to her station. A casual glance through the glass, and her eyes locked with Holiday Bob. Again. Same as last year.

Last year, that’s all it had been. One look. One meaningful, fiber-scorching look. Holiday Bob’s hazel eyes bore through the glass to penetrate every last parched ounce of Terra’s being.

A promising start, Terra thought. She was determined to build upon last year. Another nod to Hiltz, and they both agreed the game was afoot. They had spent the past week working out a plan.

When the Big Man called for his prop, Terra would retrieve it. Last year, Hiltz had done it. This year, Terra would deliver the annual whatever-it-was to the soundstage, hopefully into the waiting arms of Holiday Bob.

None of the minions employed at the West Central Communications Ministry ever knew what the Big Man’s prop would be. It was the only time he accepted replicated objects. It helped him come off as “one of the people.” He would think of it during his address, then a staffer would rush to the 3D printer, produce it, then hightail it to the soundstage.

He gave his usual spiel about the glorious Holiday commemorating the founding of the New Order.

Terra tuned out, focusing only on his inflections and gestures. She waited for the cue. When he said the word “synthehol,” Terra cast a lightning quick sideways glance at Hiltz. He acknowledged with a subtle lift of the chin.

Terra jumped up from her station. Scurrying down the hallway to the print room, she allowed herself a few thoughts about synthehol. Desalinized water with a fermenting agent. She used it on occasion, only when she wanted to forget where she was or who she was with. And it was always a three-day recovery afterward, exacerbated by a relentless thirst.

She was certain the Big Man never let the foul stuff pass through his gullet. She wondered whether he would pretend to drink it, or just hold it up to the camera.

So intent on completing her task in record time, she didn’t notice the man standing in the corner of the print room.

She selected Synth-Oak Barrel Aged-Goblet from the touch screen menu. She heard a voice behind her say, “Make it two. Three, if you’d like one.”

Terra whipped around to find Holiday Bob, standing in shadow.

She stood, paralyzed, turned at the waist with her hand reaching forward. This was not part of the plan. There was supposed to be a brief exchange on the soundstage, she was going to tell Holiday Bob that she would be in the control room if he needed anything else.

“Did you just have a stroke?” Holiday Bob asked, stepping out of the shadows. “You look too young to be a card-pulm case. Unless you have certain habits. . .”

Terra took a deep breath. She struggled to adapt her plan. She relaxed her arm, and checked the print status. Only the stem of the goblet had formed.

“No,” she finally answered, ostensibly to the stroke question. “Is there time for additional reps? The Big Man isn’t keen on waiting.”

“There’s time,” Holiday Bob said. He was at arm’s-length now. Terra could see flecks of emerald in his hazel eyes.

“You can do that?” Terra asked.

“When you’re the Director, yes,” he answered.

“It also doesn’t hurt that the Big Man requested the break,” he said.

He smiled. It was a wide I’m-really-just-a-regular-guy smile, meant to put people at ease. It worked for Terra. A little bit. It was a regular-guy-but-outrageously-sexy smile.

“I’d be happy to make you one,” she said. “I think I’ll pass, though.” She didn’t want to forget anything about this exchange.

“Here, I’ll show you a little trick,” he said. He pulled a handheld from his pocket, pointed it at a corner of the room.

Does he know where the Guardian Eyes are? Terra thought.

He then typed something on the handheld, and pointed it at the touch screen to Terra’s right.

Terra stood, watching the goblet, now nearly all formed. It smelled like ozone.

Holiday Bob sidestepped, directly behind Terra. The scent of ozone was replaced by something musky, and slightly fussy. He leaned past her. His chest touched her shoulder.

“There’s a trick, where you can call up a different menu,” he said, his breath in her ear, his fingers clunking across the touch screen. Terra saw a vast array of items scroll, some things in a language she didn’t recognize.

He stopped on something she knew. The screen read Pinot Noir ’55. He pulled away, and Terra felt the air fill the space where his touch had been.

“Are you sure you don’t want anything?” He leaned back toward her. His lips brushed her ear as he whispered, “It isn’t synthehol.”

The Big Man’s synthetic prop was almost complete. Vessel forming always took the most time. A laser arc flashed on the rim of the goblet, and then the printer spat out an unctuous, blood-colored liquid that splattered the sides of the goblet before filling three-quarters to the top.

Terra grabbed it – carefully – and brought it to a countertop. The release from Holiday Bob’s thrall was a painful relief. She sighed deeply as she wiped down the sides of the goblet and placed a cover over the top.

“We don’t need anything as fancy as a goblet,” Holiday Bob said. He eyed her up and down. “Well, maybe you do, but we don’t have time for it, in any case.”

Terra finally felt her feet and saw an opening. “What is that supposed to mean?” she asked, head tilted, one hand on hip.

“Hoo, fire! I know I read you right,” he said. She heard a twang she’d not heard before. “I don’t get to see your class so much, anymore.”

“Bold words,” she said. “You know there’s no such thing as class. Anymore.”

“Not true,” he said. He picked up a shallow, flimsy bowl from the print pad and held it forward in his palm. He motioned her to him with a nod.

Terra took hesitant steps forward. He lowered his hand, and she peered over the rim of the bowl. The smell of the rich, burgundy liquid alone was intoxicating.

Terra held it in both hands. She had never tasted real wine before.

“Class,” he said, “is more evident than ever. They’ve tried to erase the concept, but it keeps asserting itself. Organic things will always find a way to grow.”

Terra tried to stop herself from falling instantly in love with Holiday Bob.

“Here’s something a certain class of people used to do a long time ago,” he said. He held his bowl forward. “Here, touch the rim of your bowl to mine.”

She did, and their eyes locked. She held it up to her lips, and the bowl became rigid, providing a smooth and sturdy ingress for the liquid. Terra closed her eyes and let its pungent sweetness enrapture her.

When she opened her eyes, she saw Holiday Bob leering. “You’ve never had this before, have you?”

“You will find, that there are ways,” he said. “It’s like being paired. You’ve got to be paired to get ahead, right?”

Terra thought if the floor had dropped away that instant, she would still be floating. She had been joking about Holiday Bob being the one. But now he was talking about pairing. With her?

“How do you think I made it to Director?” he said. “You have to pair. But once you do, you find it’s not the prison you thought it might be. Things open up for you. Opportunities for certain. . .pleasures.”

He held up his drink and stared at regions below her neck.

Now Terra wished the floor would fall away, and take her with it. She finished the rest of her wine in one, long sip.

“It was very good,” she said, steeling herself.

“That’s not all that could be very good,” he said.

Terra nodded. “People from my class don’t rush into things,” she said.

Holiday Bob laughed. “What if they’re faced with a limited time offer?”

“Depends on how limited the time is,” she said.

He laughed again. A slimy, sexy laugh. “Certain opportunities are worth extensions.”

Holiday Bob looked at his handheld. Terra noted that he held the bowl in his left hand, the entire time. He never needed to hold it with two hands. She would have wasted both the wine and her dress if she attempted the same.

“Yes. I can take it to him,” he said. “You should get back to the control room. That’s where I can find you, right?”

Terra nodded. “Most of my time, yes.”

She watched her bowl atomize when she returned it to the print pad.

“Thank you for the wine,” she said, her back to him. She exited to the hallway and tried to quell the burning in her esophagus.

What will Terra decide? Check this space next Wednesday for the conclusion of “Holiday Bob.”