So, I spent this past Saturday evening at a monastery. No, I’m not considering a change in lifestyle. I was there for a fundraiser, and the amount of food and drink available felt decidedly un-monastic.

Saint Joseph Abbey and Seminary College is about forty miles north of New Orleans. It’s been around since 1889, when a group of Benedictine Monks from Saint Meinrad Abbey in Indiana came down to Southern Louisiana to establish a monastery. In addition to the monastic life, the Abbey also houses Seminarians from across the Gulf South as they begin their journey to the priesthood or religious life.

I’ve known the place since I was very small. My father used to take us on picnics there, on the Bogue Falaya River, which runs along the outer perimeter of the Abbey. He eventually bought some land in the woods nearby, that became his personal retreat, The Point.

My Dad attended high school at the Abbey, back when they offered secondary education. He loved it, and he never lost his affinity for the place—I think that’s the reason he bought property nearby. He wanted to write a book about the Abbey and his time there. That’s what he was working on when he died.

The Abbey Cemetery is one of the most beautiful in Southern Louisiana, in my opinion. It’s different from the cemeteries New Orleans is famous for, because it doesn’t have the abundance of above-ground tombs. I’ve known the Cemetery since I was small, too—my paternal grandfather is buried there (he died many years before I was born). My Mom and Dad are also there now. The writer Walker Percy is just a few plots away from them.

There’s something else about the Abbey, which has left a distinct impression on me from a very young age: the murals by Benedictine artist Dom Gregory de Wit. I’ve always known the ones from the Abbey church, but I just got to see the ones in the Monks’ Refectory for the first time.

My Godfather (who was with us at this fundraiser) pointed out an interesting fact: de Wit liked to put some sort of anachronistic element in his paintings. This is from a mural of the Last Supper from the Monks’ Refectory: 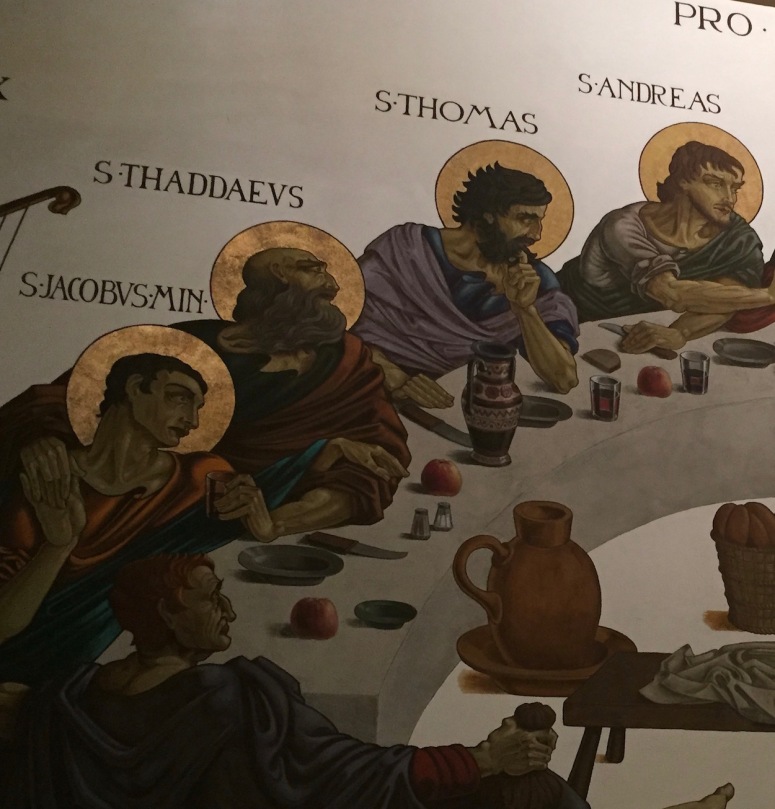 Can you pick out the anachronism? (It’s sorta center frame)

Finally, the fundraiser is called Deo Gratias (thanks be to God). They have it every year, but this year, it took on special meaning. The Abbey was inundated when the Bogue Falaya flooded earlier this year, in March. (Yes, five months before the flooding that devastated the Baton Rouge area. This has been a terrible year for floods, and not just in Louisiana). The damage to the Abbey was worse than what it suffered during Katrina.

The recovery is well under way, but there is still a long way to go. That’s why I was really glad to take part in Deo Gratias (thanks be to my sister for her generosity). There is something truly transcendent about the Abbey—in its peacefulness, its solitude, and its reverence. It has stood for generations, and I need to believe that it will be there for generations to come.