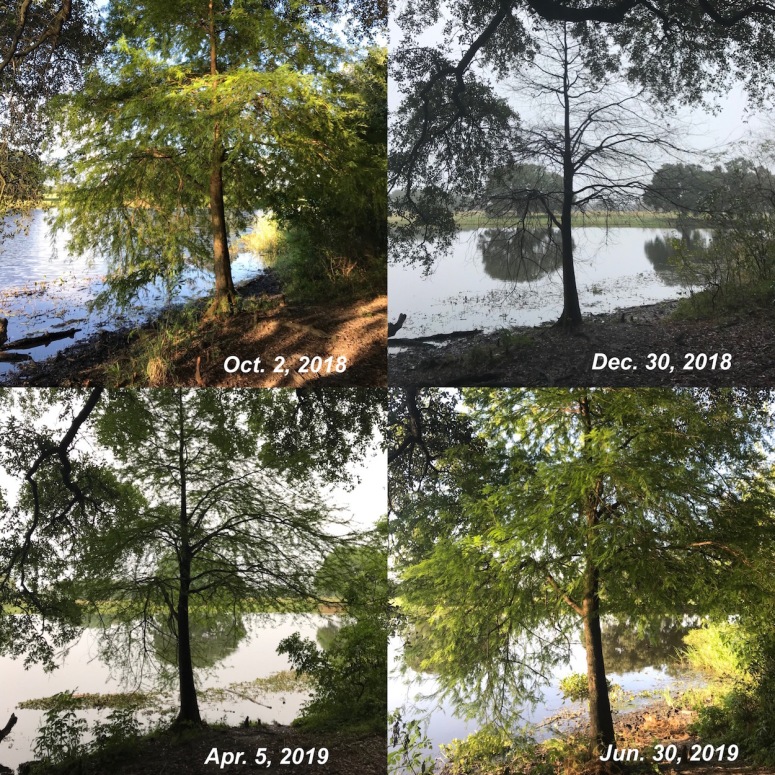 Hoping to find the exact path and the exact target week over week, quarter over quarter, is simply impossible. Despite knowing how to read the stars, sailors had to tack with the wind, leaving a wake like a zig-zag.–David Schwarz

David Schwarz is a founding partner of the ad agency HUSH. I encountered this quote last week, in a brief article he wrote for AdAge: “If I knew then what I know now … I’d sail more than strategize”

Of course, the quote struck me as hugely relevant, with my propensity to “live my life a quarter mile at a time,” just like Vin Diesel’s Dom Toretto. And, the timing was good, as I had planned to post a special “Quarter Report” this week, anyway.

What’s so special, you may ask? The specialness concerns the cypress tree pictured above. It’s in City Park’s Couturie Forest, a spot I’ve featured in this space before (most prominently in The Summer Tanager, and City Park Pictorial, Part 3). That cypress is near a picnic table, and next to a very showy live oak — it’s in sort of a natural contemplation / stopping point.

Sometime last year, I really took notice of this cypress. Specifically, the texture of its leaves, or rather, its needles. They are lacy, and soft, just like every other tree of its kind — no revelation to anyone who’s paid attention. I suppose I had never paid such close attention before.

I contemplate my writing quite a bit during my walks in the Couturie Forest, and it was the laciness of the greenery that struck me. As I was trying to conclude a series featuring a protagonist named Lacey, it was a natural connection to make. I dubbed the cypress the “Lacey Tree,” and committed to capture all its deciduous glory over the course of the coming seasons.

So here you have product of that effort. There are a thousand correlations I could make. . . did I despair that I’d never finish the story as I gazed on its spindly, denuded limbs in December? Did the suspense of awaiting new growth in March threaten to distract me from writing?

The answers are probably yes and yes, but there’s a big difference between my writing and the Lacey Tree. I don’t know how old it is, but the Internet tells me bald cypress trees can live up to 600 years. So there’s a good chance the Lacey Tree has been shedding and regrowing its foliage for some years before I ever showed up. As well as a stellar chance it’ll keep doing its thing long after I’m gone.

My window of opportunity to write the stories I want to write is significantly shorter. And my seasons and their effects are not as reliable. Requiring me to do something the Lacey Tree, despite all its magnificent, seasonal, verdure, could never do: tack with the wind.