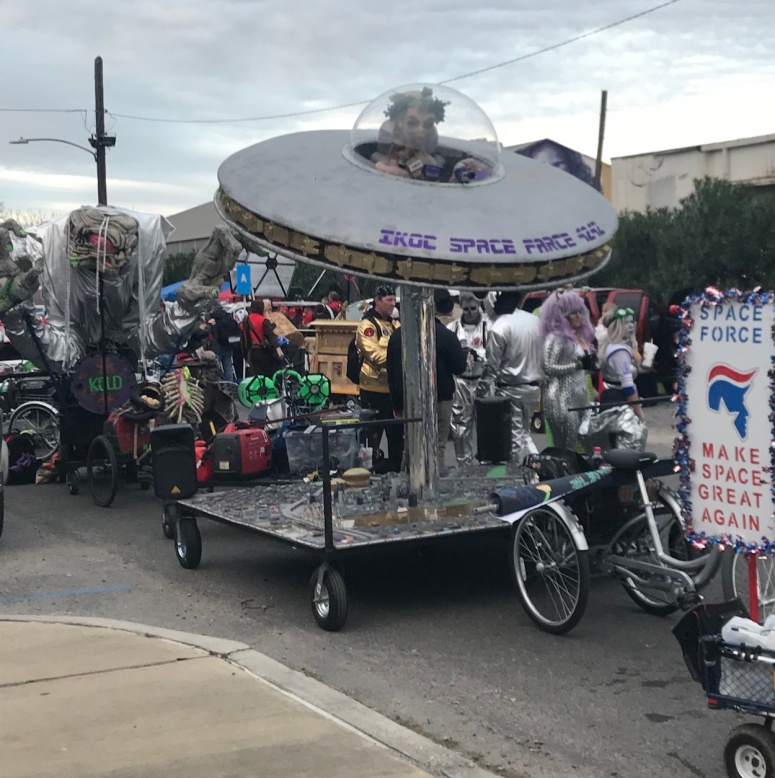 I marched with the Leijorettes in the Intergalactic Krewe of Chewbacchus parade this past weekend. There’s an “only in New Orleans” kind of sentence, if I ever heard one! For the uninitiated, Chewbacchus is a Mardi Gras parade with a science fiction theme. But that feels like an oversimplification. Chewbacchus really incorporates all the best elements of a Mardi Gras parade — satire, alcohol, grand pageantry, an overall over-the-topness — with a wide spectrum of sci-fi and fantasy fandom.

The Leijorettes are a “sub krewe,” honoring Princess Leia. (Yes, of Star Wars). This was my fifth year with the Leijorettes, and I’ve written about the experience a few times before: in Chewbacchus from 2017, and My Kind of Mardi Gras in 2016.

Everything seemed to click this year. The 2019 parade theme was one I thoroughly endorsed: “Space Farce.” Saturday night was clear and cool to cold-ish, with no wind to speak of. The spectating crowd was big and happy, as it was the only Mardi Gras parade happening in the city at the time. We’re still about two weeks away from the full, head-on Mardi Gras season, and I got the sense that New Orleans was ready to start the party a little early. (NOLA as a collective is still smarting from the Saints’ NFC Championship loss.)

I’ll conclude with a few photos, in an attempt to underscore my point: