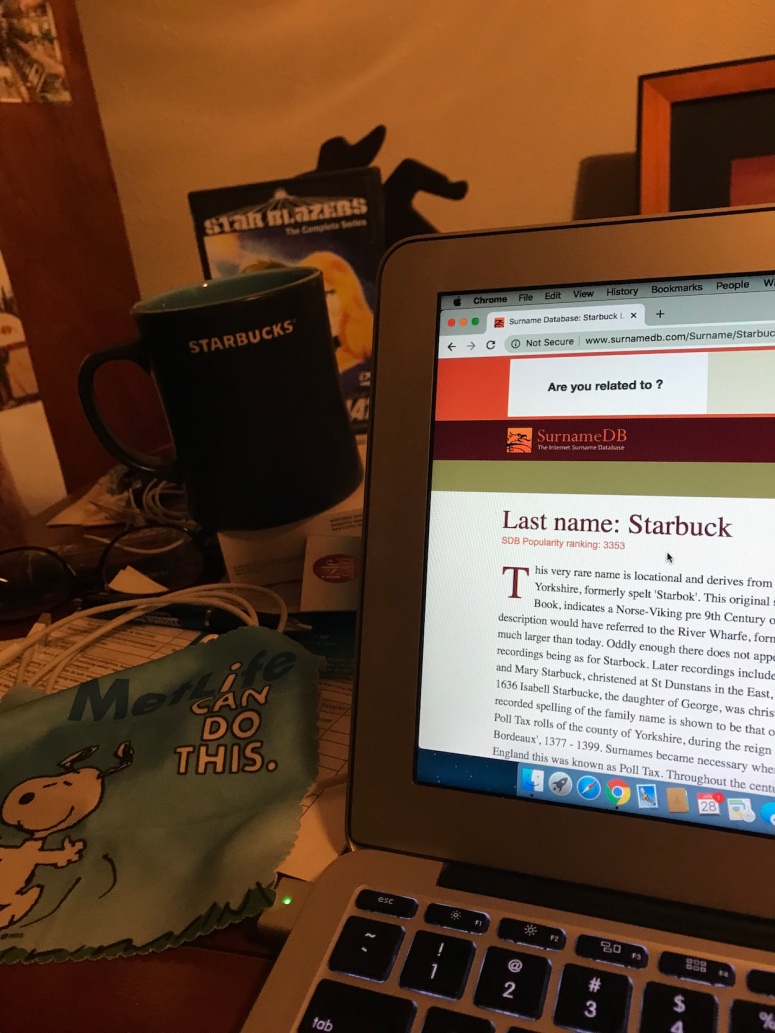 The name Starbuck fascinates me. I’ve mentioned in this space before the first time I encountered Starbucks coffee, circa mid-1980s in New York City. (see Ode to the Starbucks on Upstream) For those who remember the 1980s, you’ll know it was a time when the coffee chain was not as ubiquitous as it is today.

I was excited by the name because of Lieutenant Starbuck, the character played by Dirk Benedict in the original Battlestar Galactica. At the time, I thought the name was a great fiction, like Luke Skywalker or Derek Wildstar. (Yes, I’m going full-geek with a Star Blazers reference. One day, I’ll expound upon how influential this animated series has been to me.)

It was probably young adulthood before I realized that Starbuck is a bona fide surname. And then not long after, that a famous fictional character held the name a century before Dirk Benedict suited up in his 70s-era space opera attire. I’m referring, of course, to Starbuck from Moby-Dick. Since I’m now 37% into that tome, I’ll share with you what I’ve discovered about the surname Starbuck.

The Internet tells me there was a renowned whaling family in Nantucket named Starbuck, who likely inspired Melville in naming the first mate of the Pequod. And that the name hails from the village of Starbeck in Yorkshire. Which dates at least as far back as the 1086 Domesday Book, where it appears as Starbok, a name likely derived from the Norse-Viking “Stor-Bokki.” There’s some Internet consensus that “Stor” means great, or large in size. “Bokki” is a little less clear — it either means “man” or “river.”

Whatever it’s supposed to mean, I think it’s pretty cool that Starbuck (or some variation thereof) appears in the Domesday Book. And it kind of blows my mind that almost exactly 900 years later, I see my first Starbucks coffee shop.

Bringing it one step further, I doubt I ever would have made the connection, had it not been an affinity for the name.

One thought on “Starbuck”