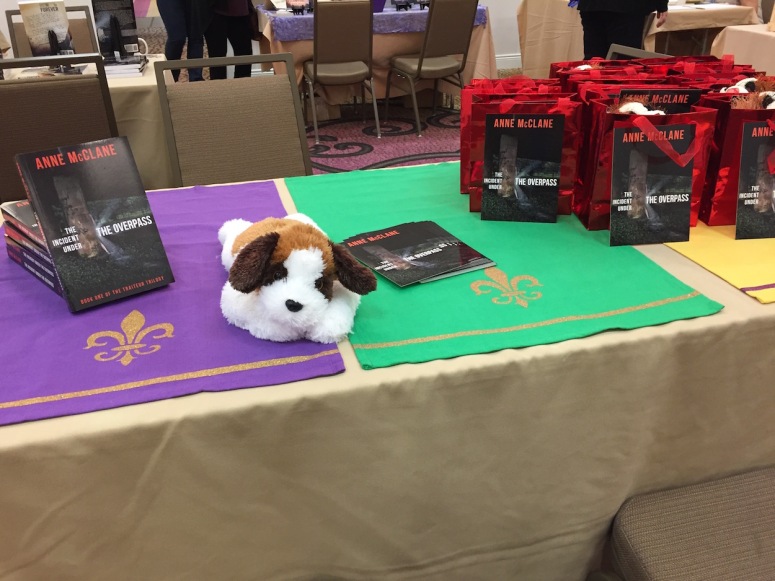 So, I participated in ARC NOLA 2017 this past weekend. ARC NOLA was an Author & Reader Convention held at the Holiday Inn New Orleans–Downtown Superdome. It was kind of surreal for me, talking to readers about The Incident Under the Overpass, sitting at a table behind a stack of books (that I wrote!)

The organizer is V.A. Dold, best-selling author of the award-winning Le Beau series. She does a great job of pulling both the event, and a great group of authors, together. As I followed the preparation for ARC NOLA on Facebook, I noticed some of the participating authors showcasing their swag. Swag?!? What kind of giveaways could I throw together—quickly—to promote the book?

I make a living preparing for trade shows, mostly business-to-business affairs, so I’m no stranger to swag. As a matter of fact, I’ve just returned from a few days in Atlanta (I left the day after ARC NOLA), where I helped to set up my company’s booth at a trade show. Highly sought after swag in years past at this show (it targets meat and poultry processors) have included a purse in the shape of a chicken, and something that is really called Chicken Poop™ Lip Junk.

Again, it was kinda heady, to be in a position to come up with swag for my very own product. But I was pretty late to the game, since I decided I needed to have swag at my ARC NOLA table about three weeks prior to the event. It was Ambrose to the rescue! I figure, he’s such a steady presence in Lacey’s life, (Lacey is the heroine of The Incident Under the Overpass), why not craft a little giveaway to celebrate him?

After all, if people will clamor for a lip balm called “Chicken Poop,” I figure a cute little plush St. Bernard should draw some attention.

I crafted some nametags for the small assortment of Ambroses, and put my website address on the back. It’s a start, and I’ve learned some tricks and thought up some improvements for the next batch. I don’t know when my next Reader Con will be, but hopefully I’ll have more than three weeks to implement.

Because I’d certainly do another Reader Con again. V.A. Dold was a pleasure to work with. I also met several authors who provided much inspiration. I have to thank Tamara McHatton for her guidance and for being such a kind and helpful table neighbor. And I also have to thank Dionne Charlet, who first told me about ARC NOLA. And who continues to be so gracious in connecting me with other New Orleans writers. And, ultimately, it was great to meet and chat with readers in that environment—readers I might never have encountered otherwise. To those of you who picked up The Incident Under the Overpass, I hope you enjoy!

2 thoughts on “My First Reader Con”